Get fresh music recommendations delivered to your inbox every Friday.

from Worth Fighting For by Seen and Unforeseen 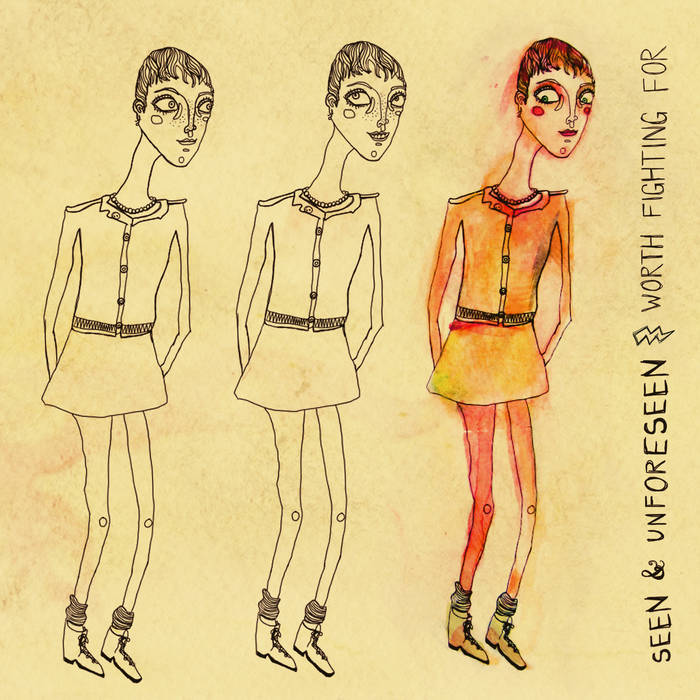 He was small, nothing special at all
Just a freckled faced boy, who’d grow so tall
Nothing in his way, with his brothers he would play
And dreaming of magic, all day

Meanwhile, she was at home, she was reading
She’d known that she was special, that she’d be leaving

Shortly they’d met, but he wasn’t fond of her yet
He found her to be annoying, but lets not forget
That he was so young, he was just having fun
Who knew the know it all girl would be the one

Meanwhile, she was crying, she had heard him
She’d hoped for some friendship, things were looking grim

Just like that she ran into the bathroom door
Never could she imagine that a troll was on the very same floor
Through her teary eyes she saw it’s ugly face
Then it raised its club and swung, with no time to waste

Meanwhile, he was worried, he couldn’t find her
He’d heard that the troll was nearby, he had to rescue her

Just like that he ran into the bathroom door
The angry troll stood above the girl on the floor
Through her teary eyes she saw his freckled face
Then he raised his wand and fought, with no time to waste

He said, 'Hermione Granger, you are in danger
I shouldn’t have said what I had said'
She replied, 'Ronald Weasley, I can’t believe you rescued me
Is the troll dead?'

And that was it, I knew they were the perfect fit
It only took them seven books to admit it

from Worth Fighting For, released July 1, 2012
Written and Performed by Eva Stormzand.
Recorded and Mastered by Marvin "Sketch" Gray.

My name is Evie (They/Them)! I like Harry Potter and playing the guitar. I live in Michigan.

Bandcamp Daily  your guide to the world of Bandcamp